During the Humanist Order of Service, five speakers from very different backgrounds paid tribute to Gerry, painting a multi-faceted picture of his life. Nick Williams, Chairman of Fanderson, spoke of the enduring appeal of Gerry’s shows for his fans, his unstinting passion for innovation in his film-making and the happy working environments he created that enabled his teams to achieve the best results.

From The Daily Mail 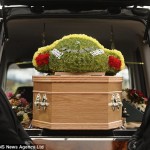 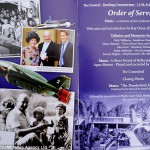 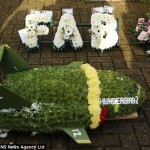 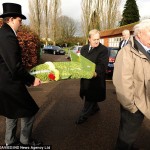 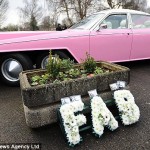 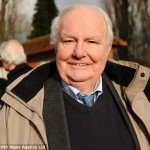 Actor and voice artist Shane Rimmer and Broadway Producer John Gore offered professional perspectives of working with Gerry. Shane described the world of wonder and imagination that he created through his shows in the 1960s and ’70s while John spoke about the drive and energy that he still maintained in the later phases of his career which helped to ensure the Thunderbirds stage play was a box office smash hit.

Jamie Anderson, Gerry’s younger son, offered some personal memories of him as a family man that were by turns both moving and funny. Jeremy Hughes, Chief Executive of the Alzheimer’s Society, praised him for the work he performed in the last year of his life alongside Jamie to raise the profile of Alzheimer’s in the national press and generate funds for the charity.

The service ended with “The Thunderbirds March”, performed by the Band of the Royal Marines. It was a fitting and poetic end to the service, with the working replica of FAB 1 that had been parked in front of the crematorium driving off into the distance as the music came to a end.

The funeral was followed by a reception at the Phyllis Court Club in Henley. A small selection of models and puppets were on display and guests were encouraged to leave their memories of Gerry on a series of specially produced postcards. Two spine-tingling audio-visual acts were provided courtesy of Kindred Productions and Crispin Merrell, composer on Gerry’s final shows (Space Precinct, Lavender Castle and  New Captain Scarlet). Crispin, who also recorded a moving piano recital of Stingray’s ‘Aqua Marina’ for the service, played themes from across the Anderson catalogue, including Thunderbirds, Joe 90, UFO, Space:1999 and his own theme from Space Precinct. A teaser for the eagerly awaited Supermarionation documentary was also screened, plus a fond parody of Space:1999.

It was an emotionally-charged day that not only mourned his passing but celebrated his amazing life and legacy. Rest in peace Gerry – your work lives on!

If you have not yet left a tribute to Gerry and wish to do so: