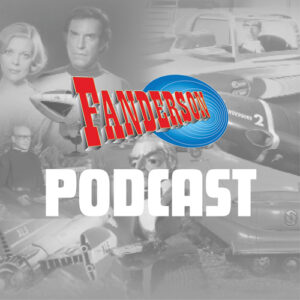 Hosted by journalist and broadcaster (and long-time Fanderson member) Ros Connors, our podcasts share information, views and stories with fans – just like you.

You can also subscribe to the podcast at either iTunes or Google podcast stores, at Podbean, and now on Amazon podcasts and Audible too!

THIS EPISODE: In a format twist, for our 40th anniversary podcast we’re trying an episode discussion panel. For this first panel, regular host Ros Connors discusses all things Thunderbirds End Of The Road with fans Kirsty Brown and Ian Fryer.

If you’d like to take part in a future Podcast panel, email fanderson.org.uk@outlook.com, noting the Anderson series that you’re most interested in.

THIS EPISODE: By popular demand, a Space:1999 special!

Christopher Penfold (Space:1999 Story Consultant and Scriptwriter) joins Ros, along with writer/journalist/editor David Hirsch and author Robert E Wood in a Space:1999 special. Plus more from the archive with Barry Morse recounting his time on the series.

THIS EPISODE: David Hirsch and Gordon Moriguchi discuss Anderson series merchandise, and actor Vicki Michelle pops in for a quick chat about her time on Space:1999.

THIS EPISODE: Ian Fryer expands on his FAB 70 article about Anderson productions on 8mm film, and diverts a little to touch on Viewmaster and Noddy. Frances Barber pops in with an anecdote about her time on Space Precinct Hate Street, and Fanderson chairman Nick Williams talks about the UFO Annual, FAB 96 and how being a not-for-profit club dictates the way we operate.

THIS EPISODE: The man behind the Super Space Theater project, David Hirsch, explains how it all came about, plus an archive interview with Stanley Unwin