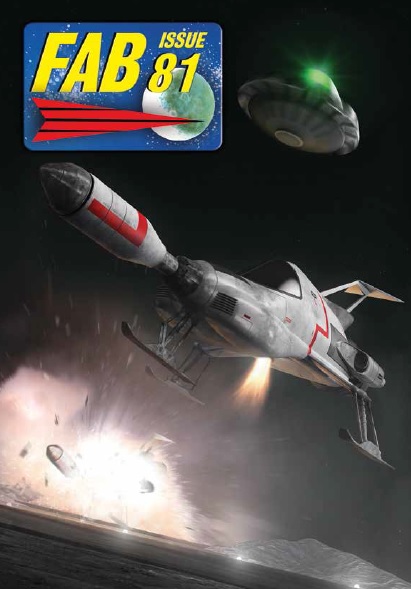 FAB 81 is on its way to all Fanderson club members!

As always, we have all the latest news from the Andrson universe. We profile the opening 13 episodes of ITV’s smash hit new series Thunderbirds Are Go, and chat to the voice artists about their involvement. We also have news of Vivid Imagination’s return to Tracy Island and three vintage audio adventures of International Rescue that will be filmed with your help!

Following the sad news of Judith Shutt’s death earlier this year, we remember the puppeteer who brought the characters of Thunderbirds, Stingray and Fireball XL5 to life with her talents.

In this issue’s major article, Ian Fryer takes a close look at Century 21′s only live action series: UFO. We take you through all 26 episodes, exploring the world of SHADO and discussing the key themes of the series. We also catch up with special effects model maker Alan Shubrook and his memories of working on the series. Oh, and our amazing front cover is courtesy of Chris Thompson!

Did you grow up with any of the Anderson activity books? For many fans these books became their first collectables. Steve Kyte explores the early years of this fascinating type of merchandise in the first part of a new series of articles.

The Thunderbirds 2004 movies gets the Timelash treatment this time. Has history been kind to it? Read on to find out…

Finally, and incredible though it may seem, it’s been 10 years since New Captain Scarlet burst onto our screens. To mark the anniversary, Stephen Baxter analyses the series comic, and the small selection of associated books based upon New Captain Scarlet.