It’s been five years since the last full-weekend Fanderson convention – and it was certainly worth the wait. We look back at The Future is Fantastic! – an event featuring unforgettable guests, mouth-watering merchandise, beautiful puppet and model exhibitions, heart-warming reunions and new friendships and that damned Saturday night quiz…!

When fans reflect on the whole weekend, many will say that the highlight was undoubtedly Sylvia Anderson’s first-ever appearance at a Fanderson convention. She received a standing ovation and a film-star-like entrance, with camera flashes going off for several minutes as the interview started. 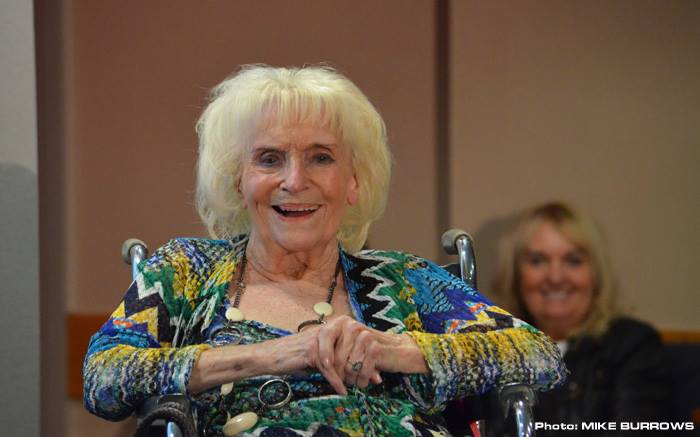 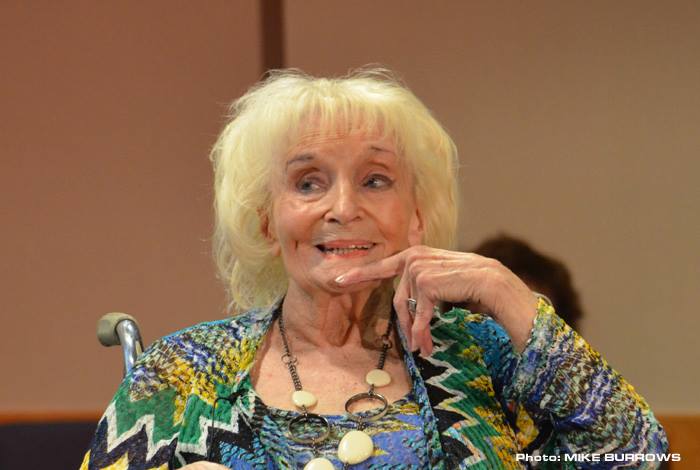 In a wide-ranging interview with Ian Fryer, Sylvia spoke about the early days of working for Roberta Leigh, the financial troubles of AP Films that culminated in Lew Grade bankrolling their productions, and overhauling Ed Bishop’s dress sense for UFO! She also talked about her relationship with Lew Grade, and the great man’s softer, humane side, which came to the fore as her personal problems developed. According to Sylvia, Lew was honest – he didn’t understand scripts, and wanted to see finished the finished production before making a judgement about it. He trusted the team to deliver them and make the creative decisions. The only advice he ever gave Sylvia about Lady Penelope was not to make her too posh! 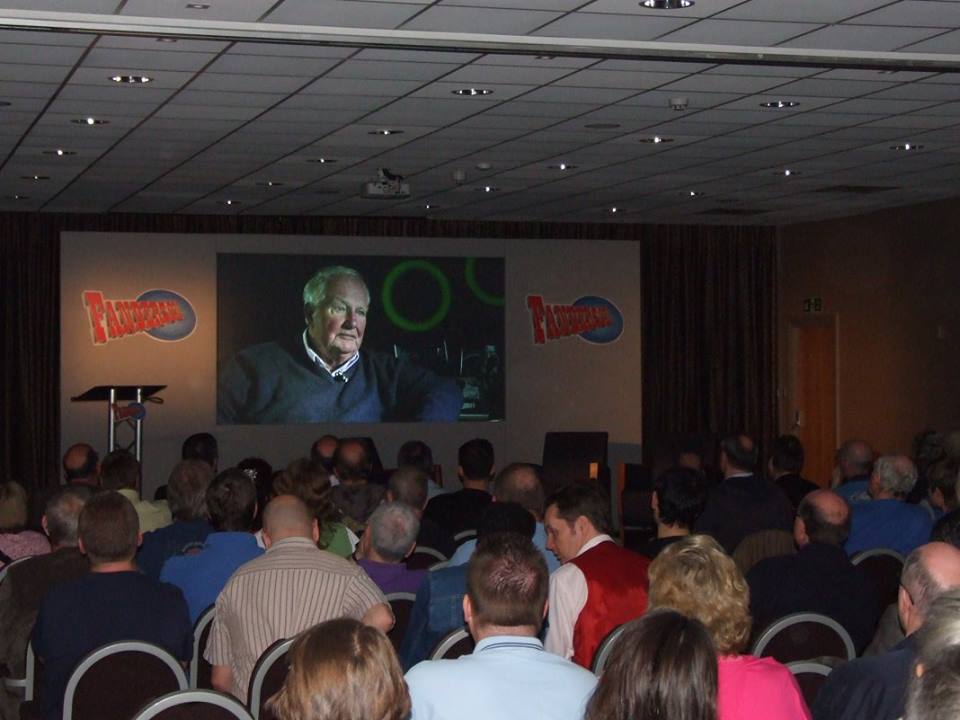 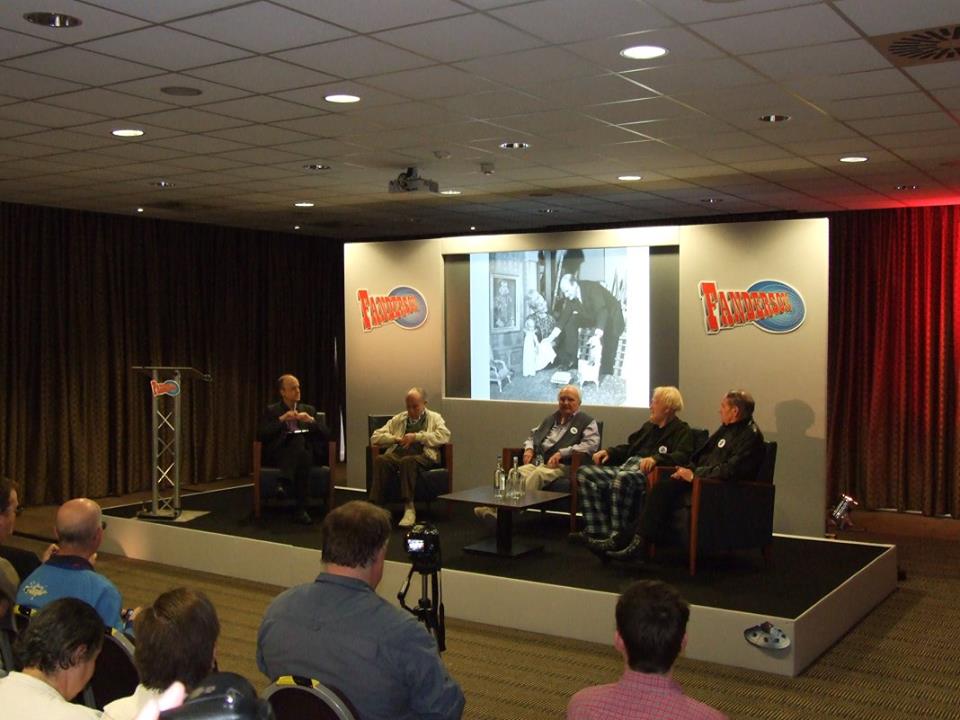 Before this, the Tracy brothers were reunited for a highly entertaining interview with Marcus Hearn. Voice artists Shane Rimmer, Matt Zimmerman, David Graham and Jeremy Wilkin talked about wrangling with Polgram for Thunderbirds royalties, why modern actors can’t speak their lines properly and the new Thunderbirds Are Go! series. Incredibly, Matt and Jeremy also discovered that they had appeared in the same production of Twelfth Night back in the 1950s…This was just the kind of oddity to come out of a Fanderson convention! 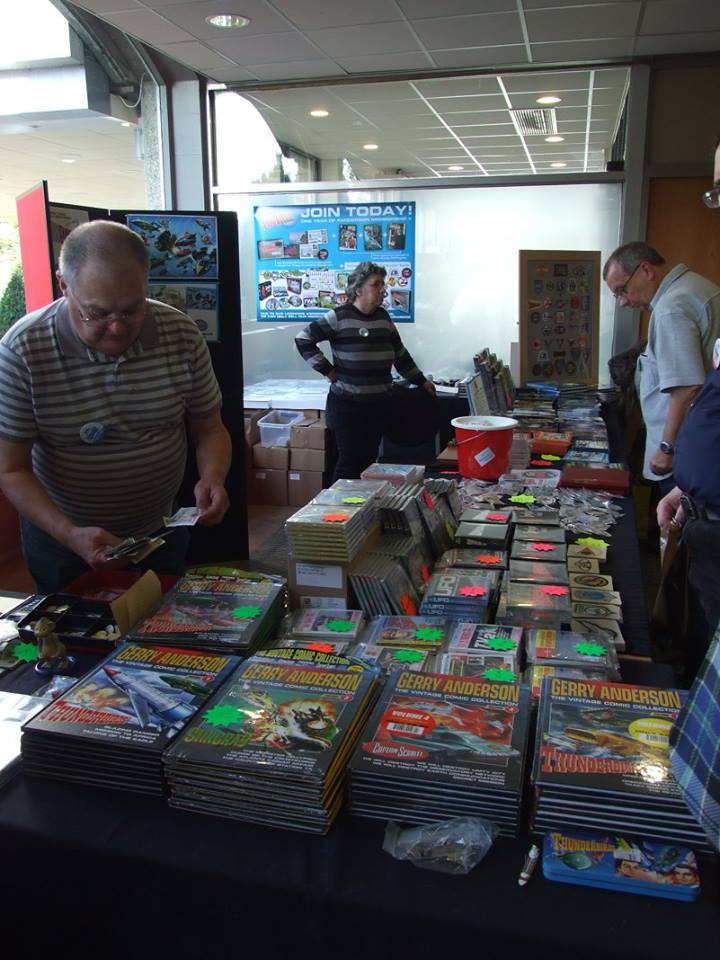 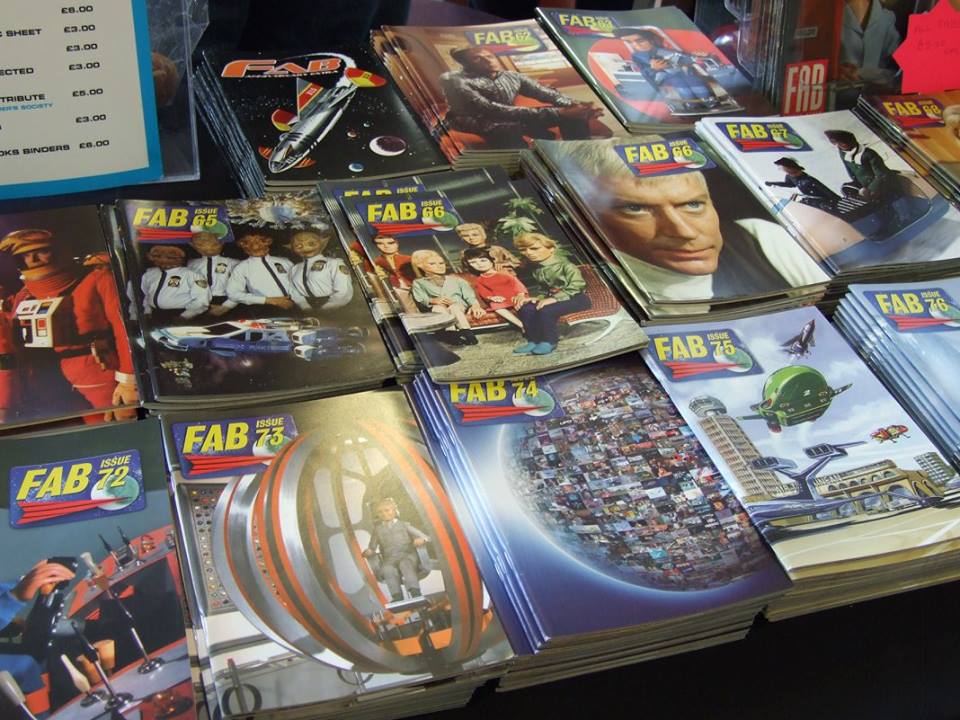 The weekend also saw the launch – or imminent launch – of several exclusive new pieces of merchandise. Fanderson’s very own 3-disc CD soundtrack of Captain Scarlet was flying off the shelves, as well as the third installment in the club’s successful sweet cigarette card book series. Fanderson and Robert Harrop ran a sales presence all weekend on the ground floor of the hotel, while a separate dealers room was run upstairs. In particular, fans were wowed by Robert Harrop’s Parker and Light-Fingered Fred, commissioned exclusively for the convention and limited to just 150. Meanwhile Modiphius demoed their Thunderbirds Co-Operative board game, which is due out in December, and Alan Shubrook was selling signed copies of his Century 21 FX Update book, which was inspired by a trip to the old Century 21 film studio on the Slough Trading estate, prior to its demolition. 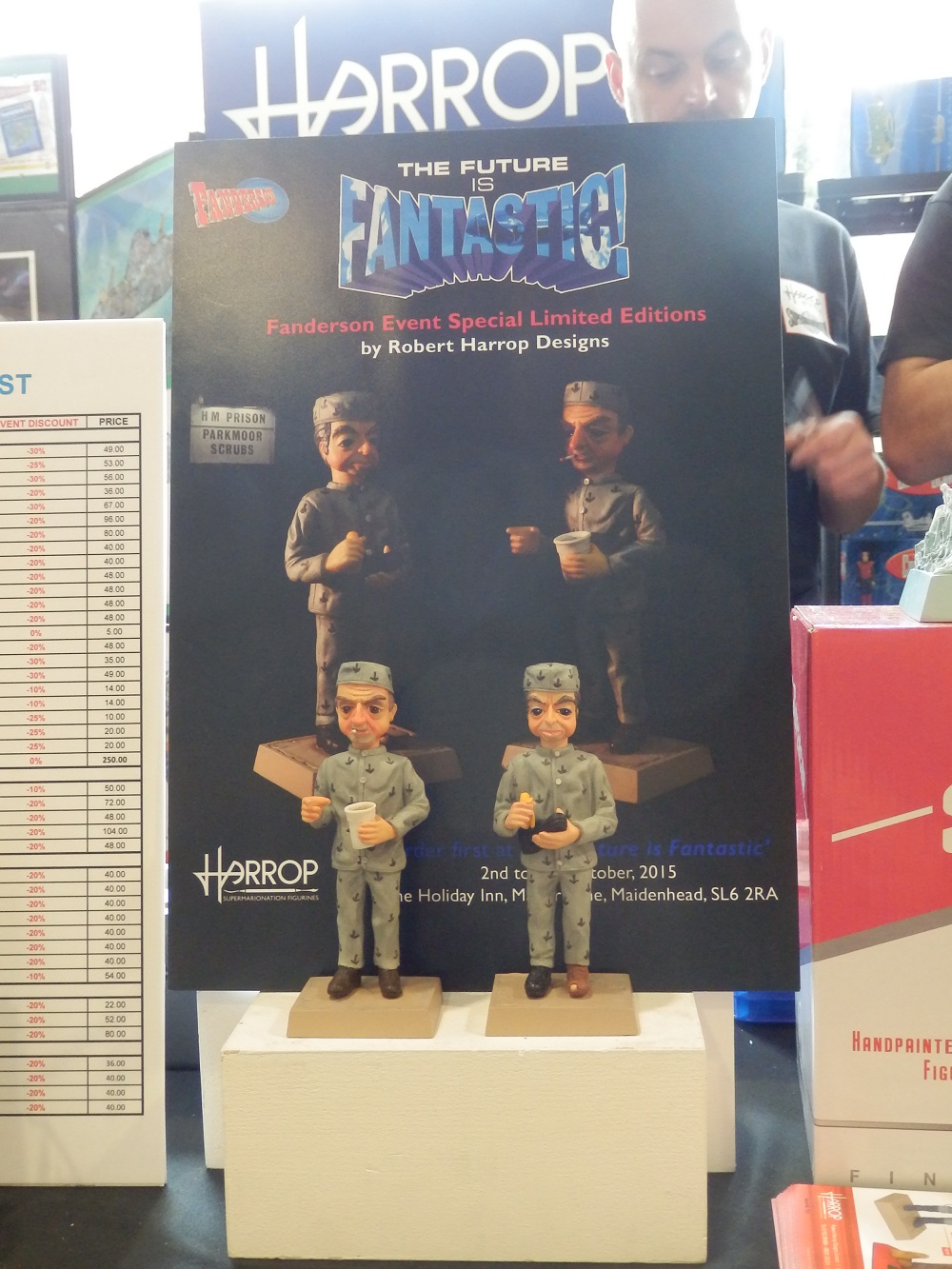 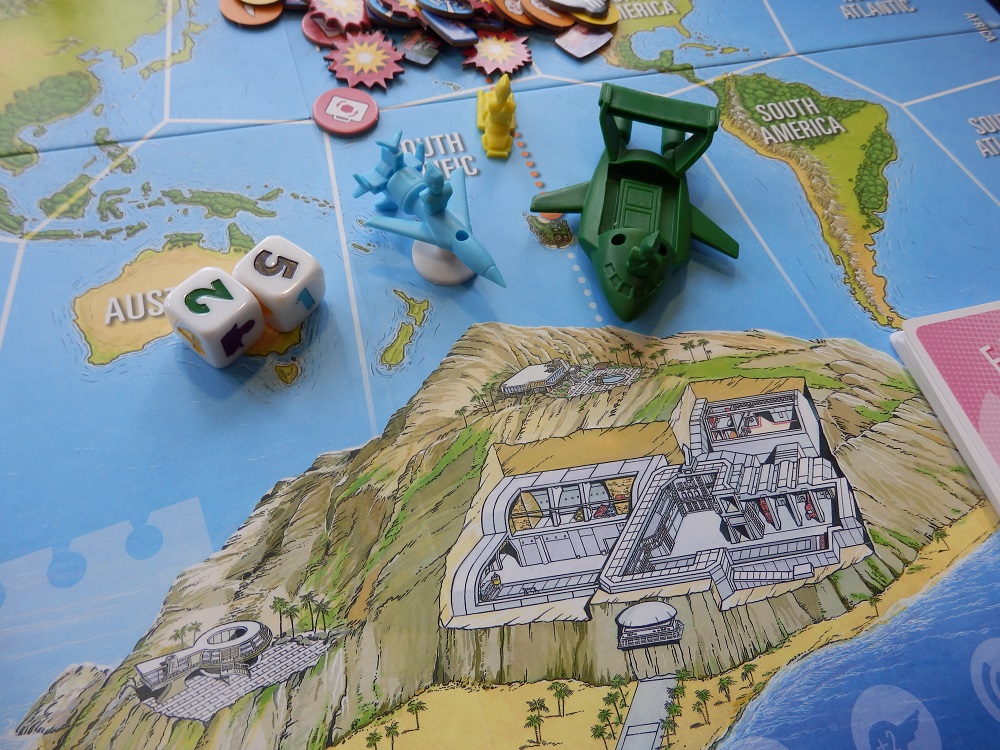 Alan also ran two presentations over the weekend to celebrate Thunderbirds’ 50th anniversary, and to share his experiences of revisiting Stirling Road. The new books didn’t end there. Marcus Hearn and Mike Jones provided fans with an overview of their stunning, lavishly illustrated new history of Thunderbirds, The Vault, as well as the 50th anniversary bookazine. The Vault in particular was full of photographs of rare merchandise and never-before-seen production stills. By showing slides of the finished book, they let the pictures tell their own story. 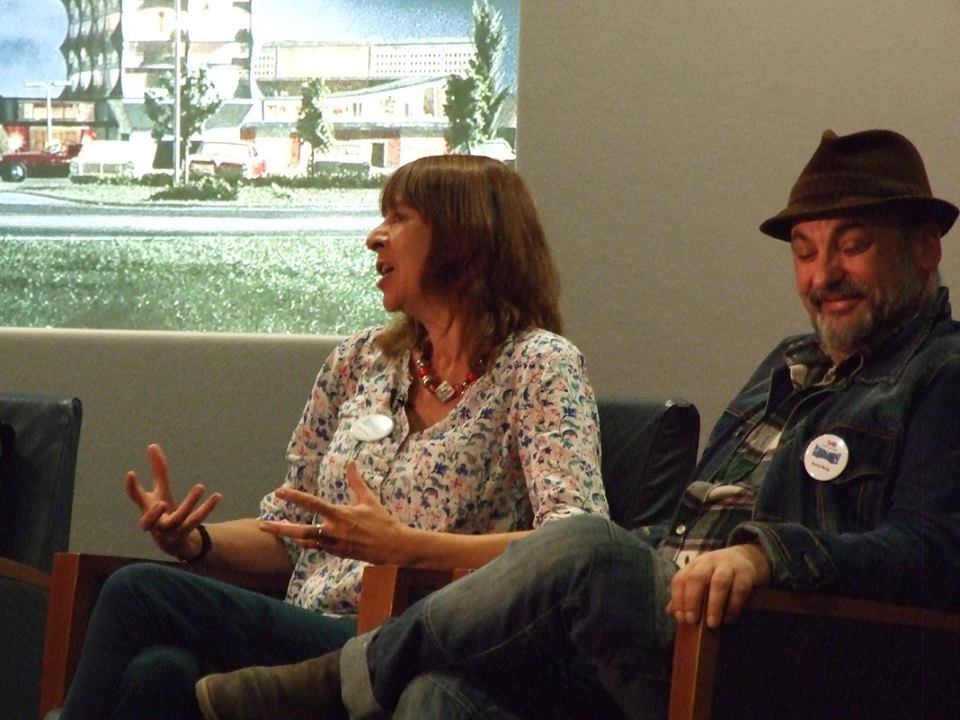 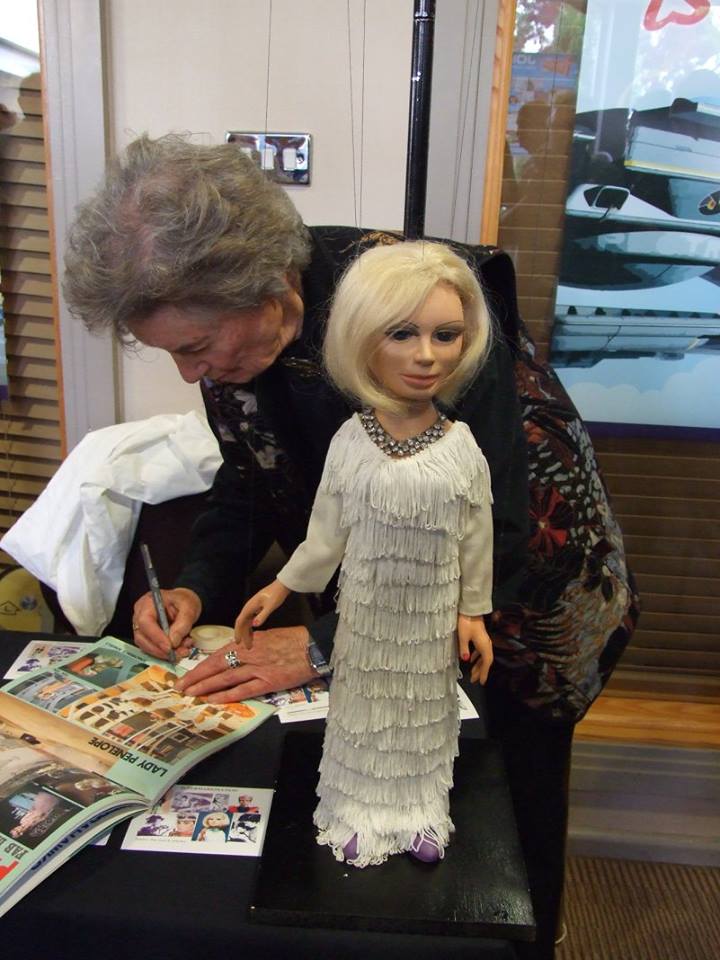 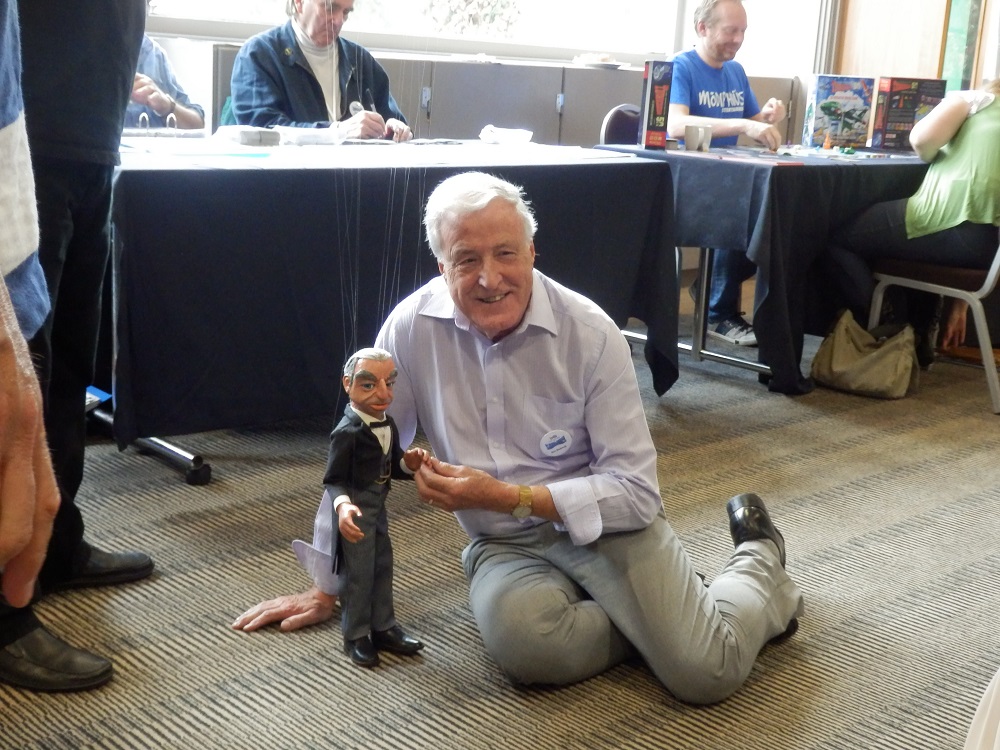 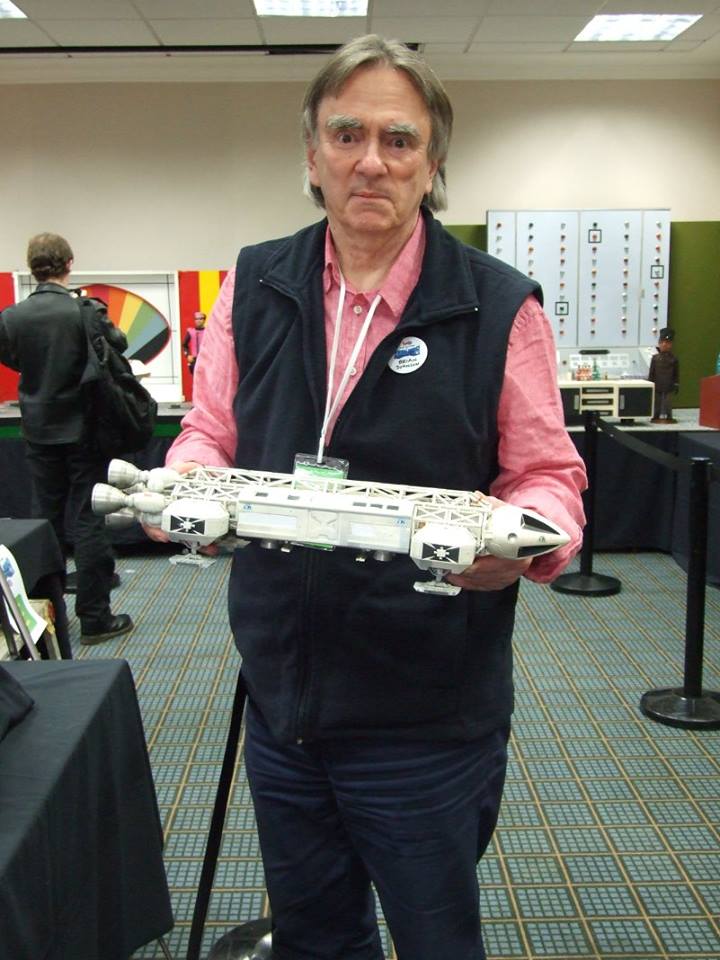 Mike Trim and Brian Johnson discussed model and special effects, while Mary Turner and Judy Preece revealed some of their puppeteering secrets from their work on the Supermarionation series and Terrahawks respectively. The Terrahawks theme continued on Saturday afternoon with modelmaker John Lee talking about his favourite model on the series – the Overlander, a replica of which was on display. 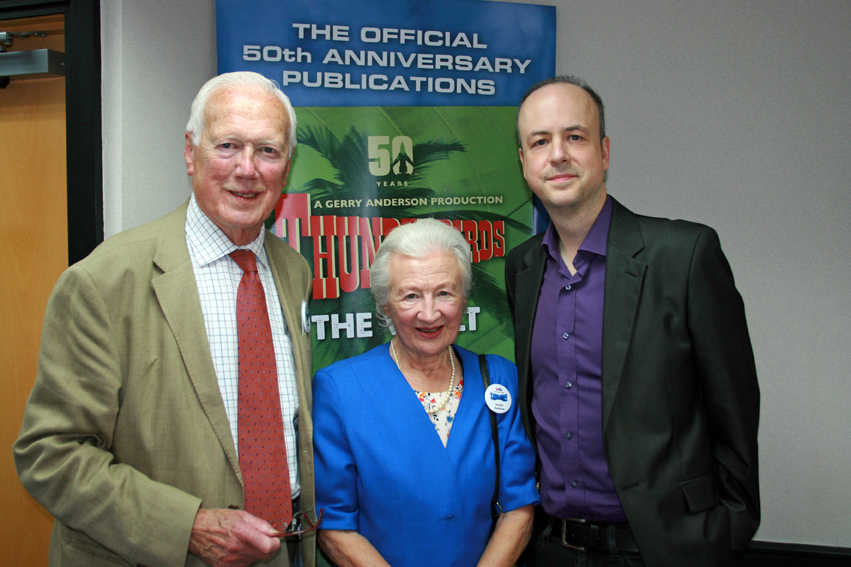 The headline attraction of Sunday was arguably Marcus Hearn’s interview with Keith Shackleton, head of AP Films (Merchandising) Ltd, and responsible for the licensing of merchandise for the Anderson series during the 1960s and 70s. Making his first ever appearance at a convention, and with his wife Gwyneth in attendance, Keith provided some great insights into the business decisions behind some of our favourite shows, including the setting up of the SuperCar Club, which received  70,000 members in its first three weeks, and the creation of TV21, which he regarded as one of his proudest achievements. He also spoke movingly about the deteriorating relationship between Gerry and Sylvia Anderson, his resistance to selling AP Films to Lew Grade, and his disappointment at the failure to secure a network deal for Thunderbirds in America. Keith’s appearance proved so popular that an episode of UFO was cancelled to extend the interview.

Earlier, Terry Adlam (writer/director of Dick Spanner) helped to shake off a few well-deserved hangovers from Saturday night with his memories of starting off in the film industry. His first job – on  Raiders of the Lost Ark – saw him confronted by a python and come away with Steven Spielberg’s autograph. He was followed by Anderson super-artists Mike Noble and Graham Bleathman, who discussed the challenges of rendering complex models such as the Eagle Transporter with Mike Jones. Dust clouds help to reduce the need to draw elliptical wheels on the SPV, apparently! 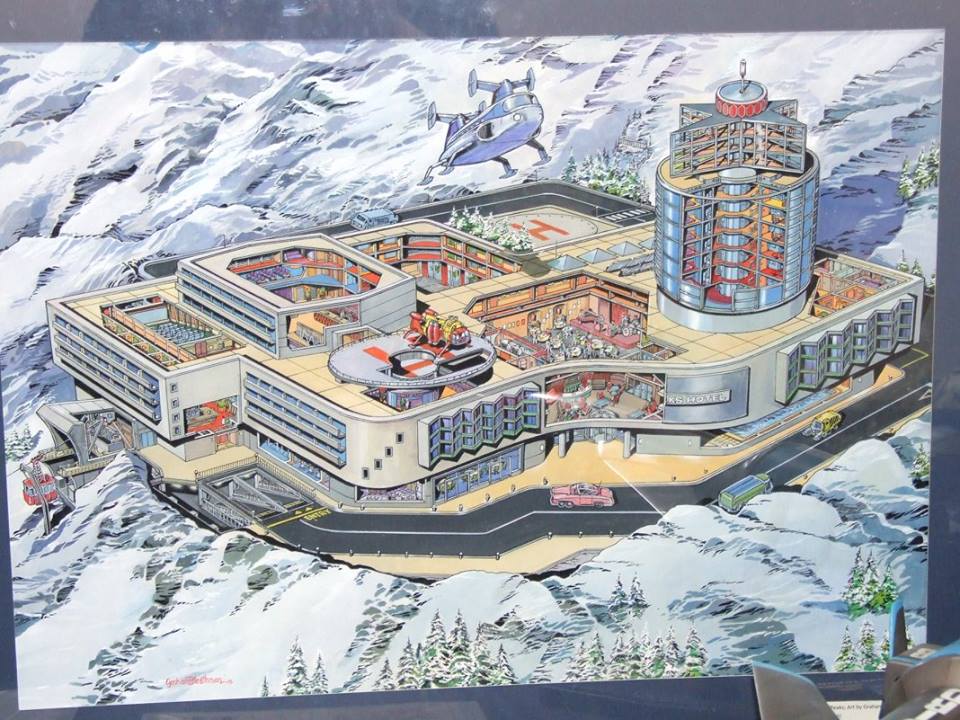 The Sunday interviews ended with a Space:1999 theme. Supported by Ian Fryer, writer and story consultant Christopher Penfold provided a live commentary on one of the show’s most sophisticated episodes – Black Sun. This was followed by an interview with actor and stunt artist Roy Scammell, who regaled fans with his memories of a young Sean Connery, horrific injuries to his stunt colleagues and a future film project. 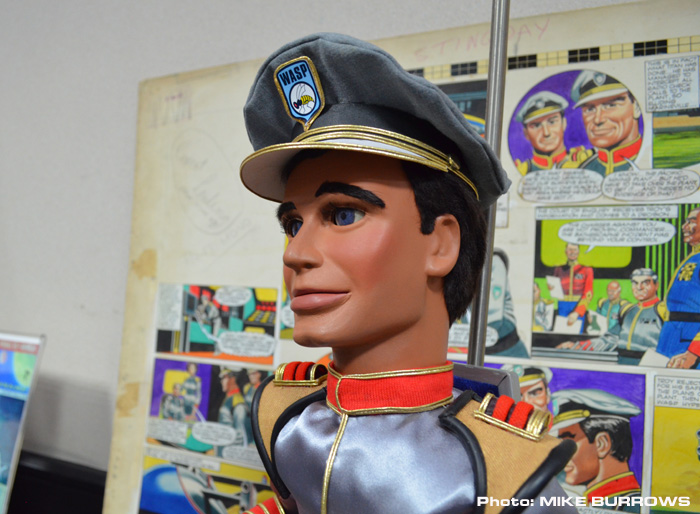 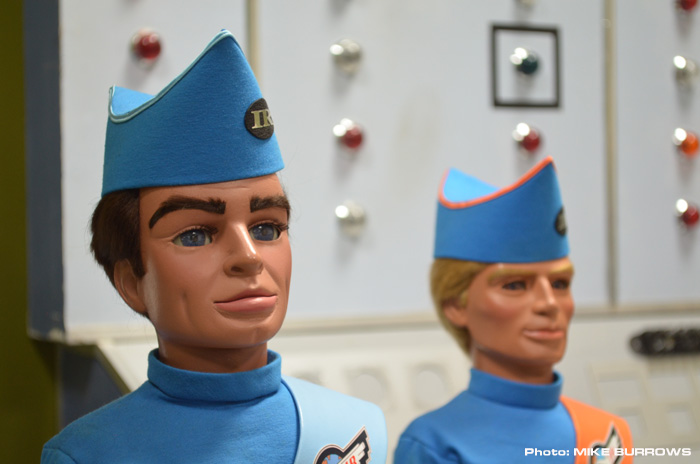 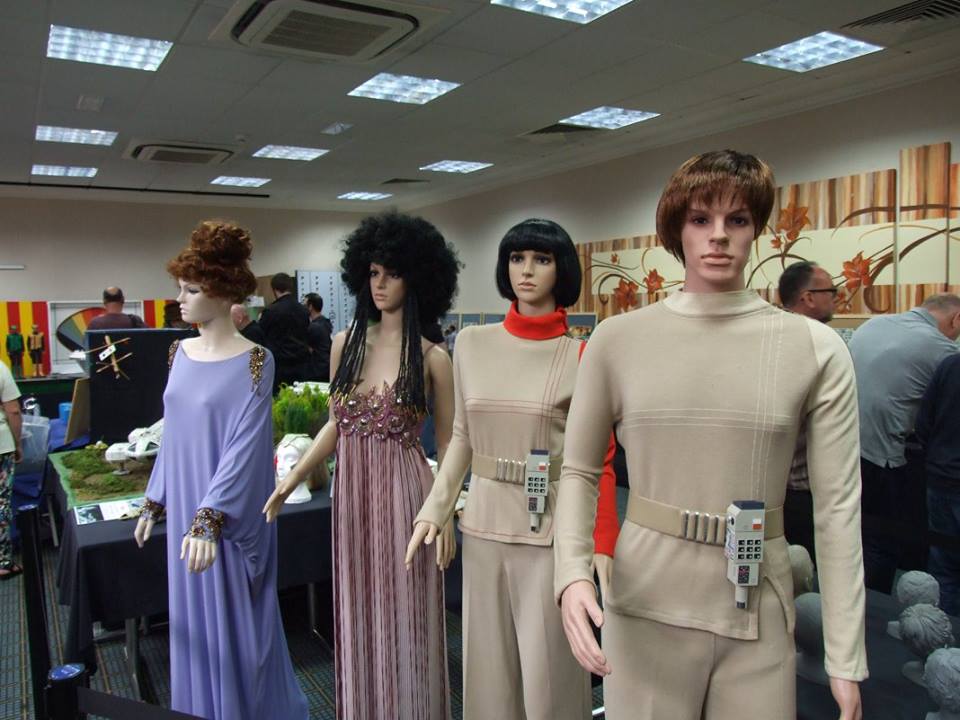 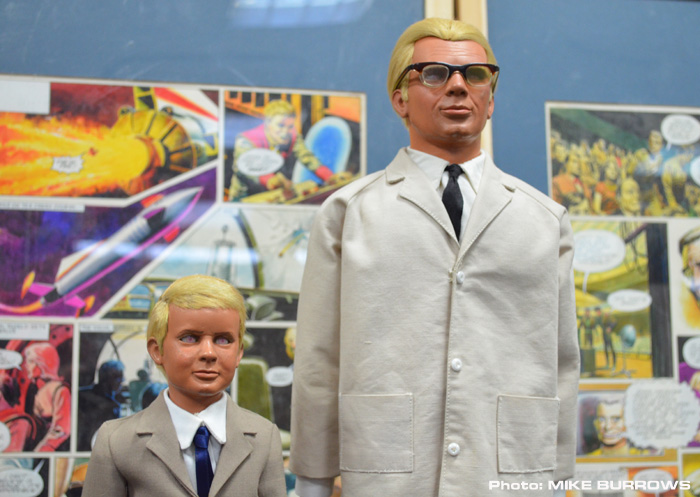 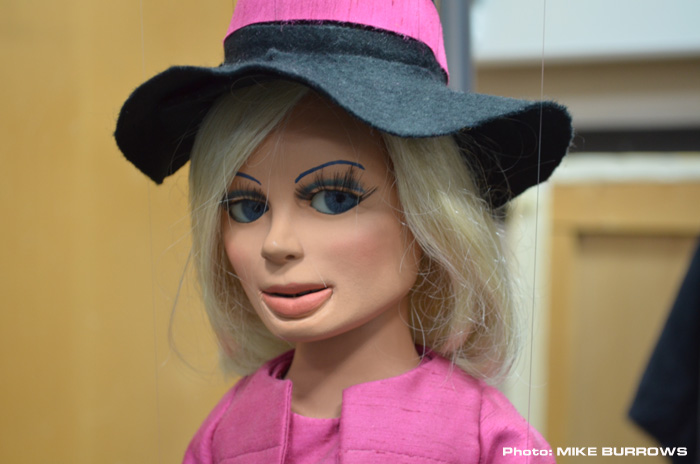 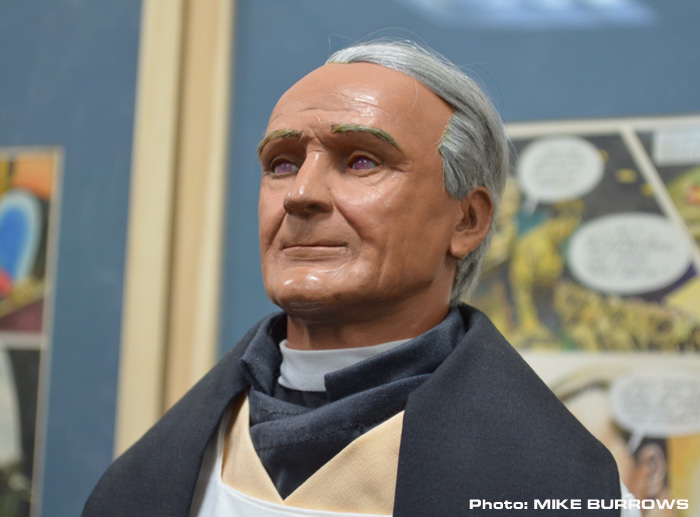 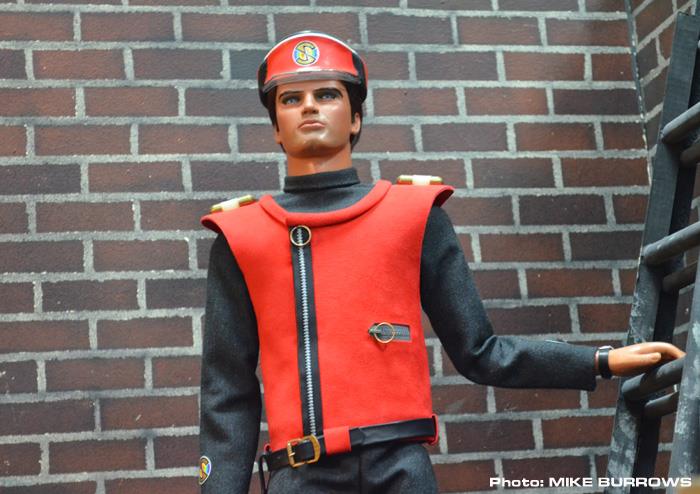 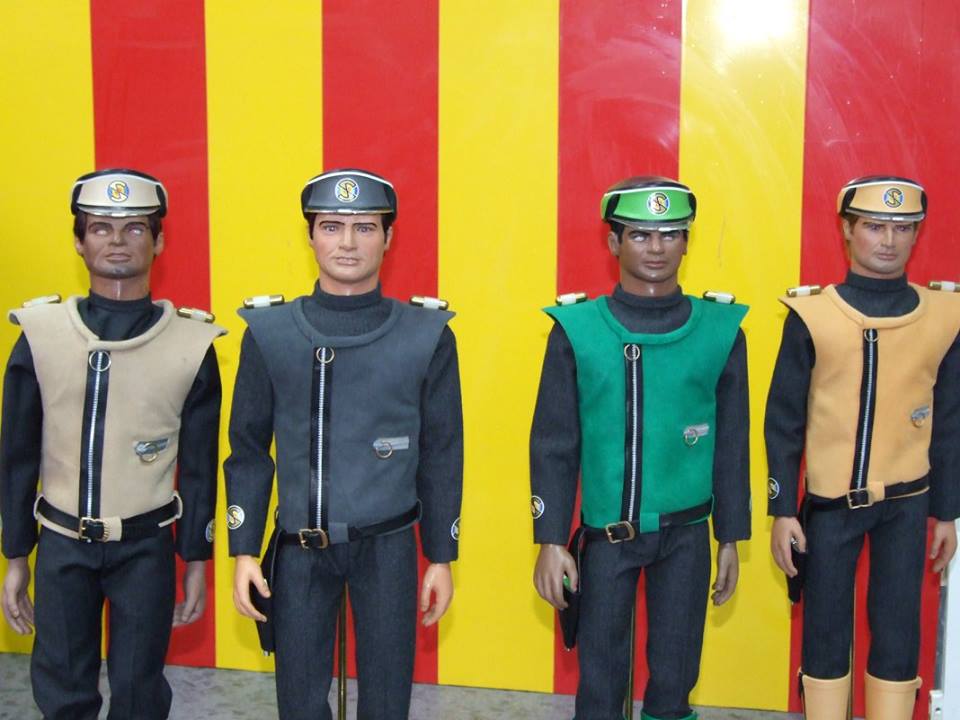 In the best tradition of Fanderson conventions, plenty of other things going on away from the main features room during the whole weekend.

The model exhibition room was something really special this time, outdoing previous Fanderson conventions. Co-ordinated by Derek Eaton, Chris King and Chris Trice, but with contribution of many talented model makers, the exhibition featured many highlights, including an original Stanley Unwin puppet, a veritable fleet of Eagle Transporter craft, a host of replica and original puppets from Captain Scarlet and Joe 90, and beautiful reproductions of the Thunderbirds craft. 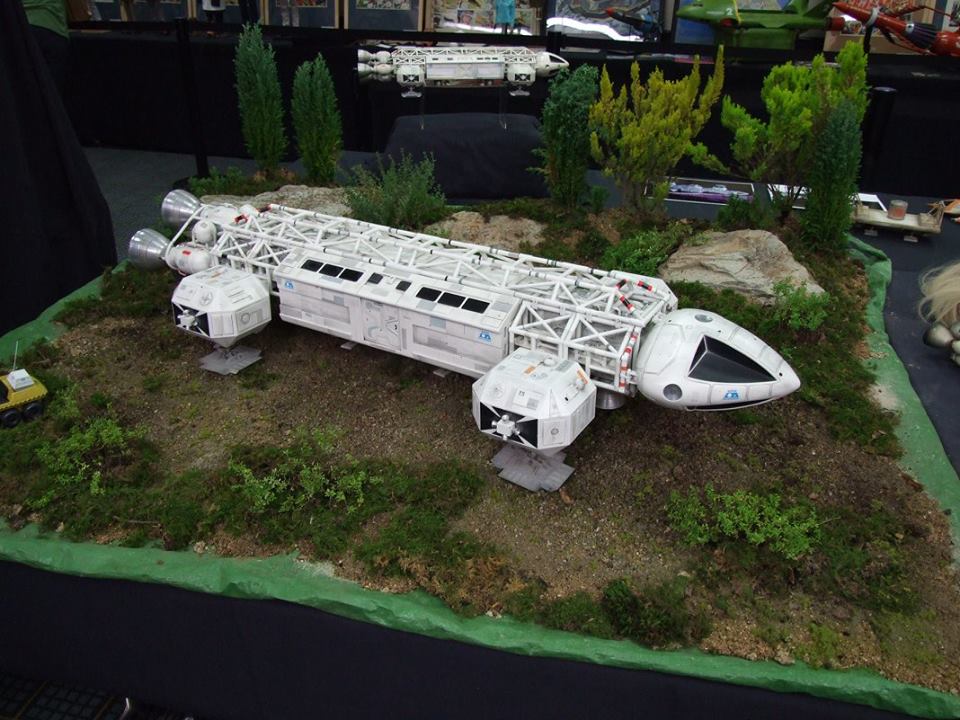 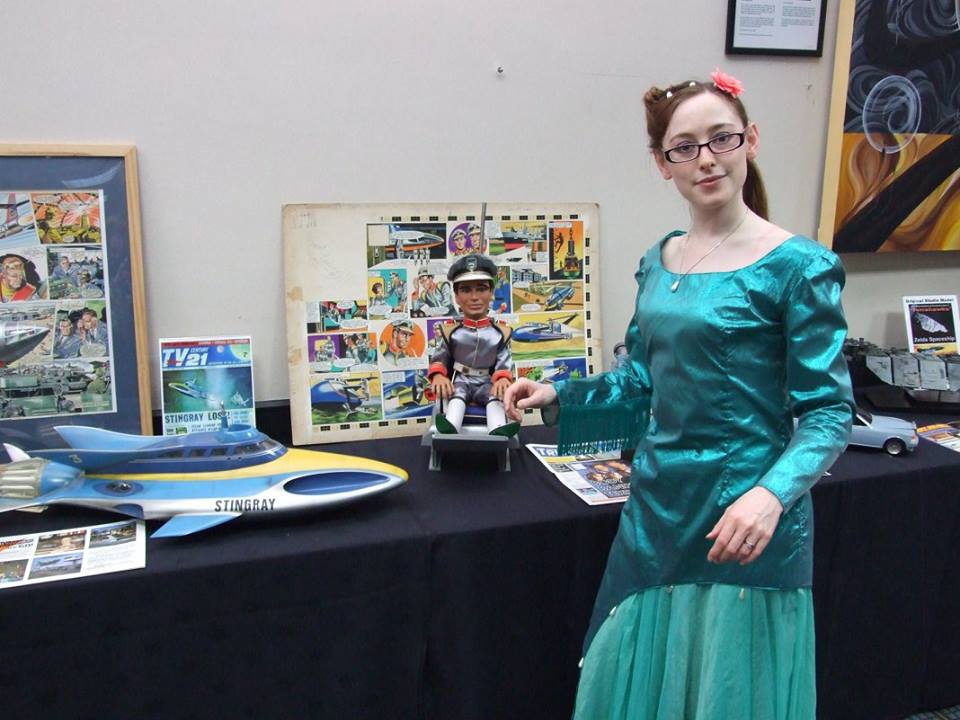 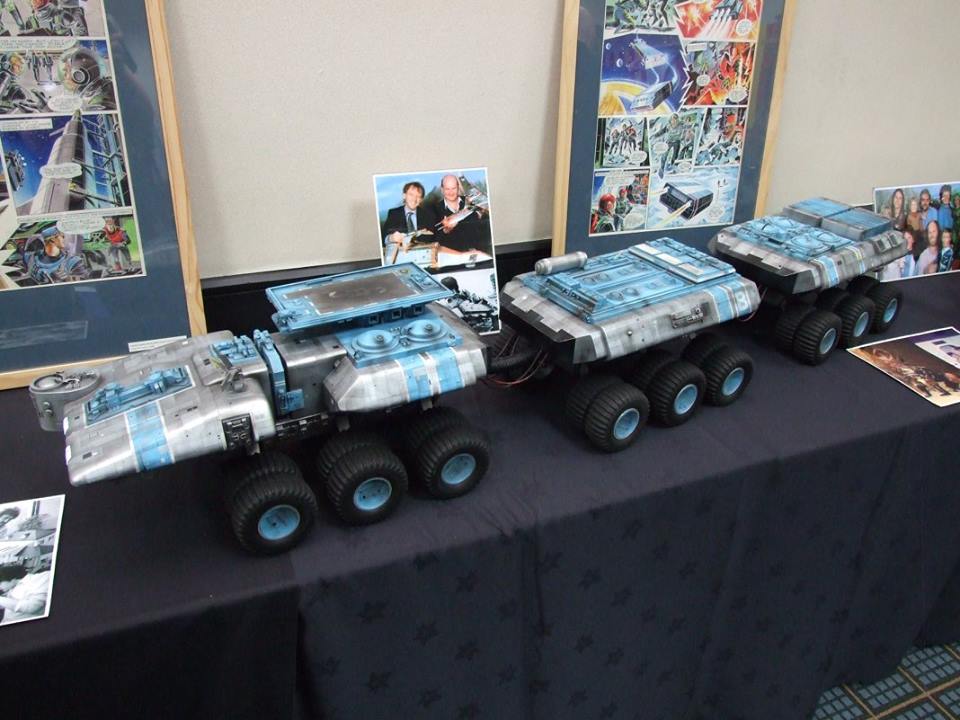 Expertly co-ordinated by Katie Bleathman, there was also a packed programme of workshops that allowed fans to explore more specialised aspects of the Anderson universe, including learning puppetry techniques, hearing from a wide range of professional Anderson artists and discovering how to ‘dirty down’ your models.

With so much going on, there was also a separate screening room was running throughout the weekend for anyone who wanted a quiet moment away from the main features area.

As usual at a Fanderson convention, Saturday night was a chance for everyone to unwind with food, prize-giving, some friendly competition and a few drinks!  A raffle was drawn by the irrepressible Matt Zimmerman, followed by a buffet dinner and a fiendishly challenging quiz compered by chairman Nick Williams. Some people made a special effort to dress the part, while Lady Penelope, Grandma Tracy, Marina and Captains Scarlet and Magenta were also in attendance!

Throughout the weekend, fans donated generously to the cub’s two convention charities, Children In Need and The Alzheimer’s Society. Thanks to a host of puzzles, raffles, a blind auction, buying anniversary stickers and other donations, an incredible £1,278 was raised, to be split equally between both charities.

Phew! So there we have it. Nick Williams’s closing speech helped remind us just how many people have played a part in making this convention possible. Without your contributions – large or small, this weekend or six months ago – the future wouldn’t have been quite so fantastic. Thank you!

Thank you to Mark Simpson Wedge, Sharon Ankin and Mike Burrows for use of their photos in this report.