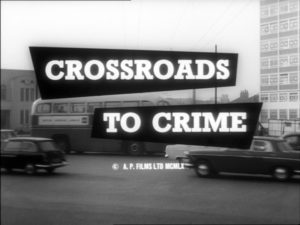 Filmed in and around Slough during the summer of 1960, the film features quite a number of production personnel on the credits who would shortly after go on to work on Supercar: director of photography John Read, editor David Elliott, composer Barry Gray and continuity girl Sylvia Thamm, who became Sylvia Anderson shortly after filming was completed when Gerry Anderson divorced his first wife Betty.

In front of the camera were both David Graham, later heard as the voice of Dr. Beaker in Supercar, and the late George Murcell, Supercar‘s first season voice of Professor Popkiss (he was replaced by Cyril Shaps in the second season). Graham went on to voice numerous puppet characters in Stingray and Thunderbirds, most notably the latter’s Parker and Brains. He and Miriam Karlin (café owner Connie Williams) were reunited some thirty years later when they appeared together in the BBC sitcom So Haunt Me.

The film’s star, Welsh actor Anthony Oliver (P.C. Don Ross) was best-known as a TV storyteller although he did appear in other films productions of the period, most notably the 1954 picture The Runaway Bus, featuring the late Frankie Howerd. Oliver later achieved a measure of success as an author of murder mysteries.

Crossroads To Crime was released in the UK by Anglo Amalgamated distributors and given a ‘U’ Certificate (suitable for all viewers). At a mere 57 minutes duration, the film was intended as a ‘B’ feature, a short film shown alongside the main feature to bump up the cinema programme to nearly three hours.

Barry Gray’s frantic opening titles theme later appeared in the Captain Scarlet episode Manhunt: it is heard playing on the garage mechanic’s radio just before he is crushed by Captain Black.

Gerry Anderson has been quoted as dismissing Crossroads To Crime as “possibly the worst film ever made”, although a surviving review of the film in ‘Monthly Film Bulletin’ suggests that he might have been a little hard on his own creation: “Quick off the mark,” it reads, “this modest little thriller soon settles down into a routine ‘cops and robbers’ format, efficient if not always too convincing”. The small scale of the film is perhaps best summed up by the rather quaint slogan on its poster: “£20,000 The Prize And Death The Price!”

Crossroads To Crime has been shown at least once on terrestrial television in the UK, and was released on DVD in the UK as part of Network’s Edgar Wallace series in 2013. A print of the film exists in the archive of the British Film Institute and was screened for the first time in over 35 years by the National Museum of Photography, Film and Television as part of a special retrospective of Anderson’s film work at the Museum’s Pictureville Cinema in Bradford in 1997.