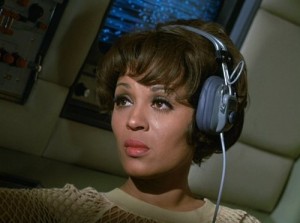 As many fans will be aware, Dolores Mantez, much loved for her role as Lieutenant Nina Barry in UFO, died in November following a short illness.

Dolores began her career as a singer but went on to appear in a wide range of classic British TV shows in the 1960s and early 1970s, including Danger Man, Z-Cars, Randall and Hopkirk, The Avengers and The Onedin Line, as well as a number of West End productions and musicals. However, it is for her glamorous role as a Moonbase Operative in UFO that she is most fondly remembered. She starred alongside Ed Bishop in the dramatic two-hander Sub-Smash, widely regarded as one of the best episodes in the series and a firm favourite at convention screenings.

Fanderson offers its condolences to her family and will be providing a full obituary in the next issue of FAB.