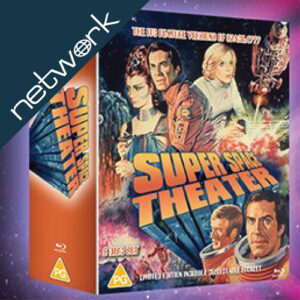 In the late-70s/early-80s ITC (capitalising on the success of Star Wars) edited episodes of several Gerry and Sylvia Anderson productions to create what would ultimately become thirteen full-length movies for cable and home video under the banner Super Space Theater. The four made from episodes of Space:1999 – Alien Attack, Journey Through The Black Sun, Cosmic Princess and Destination Moonbase Alpha are being released in a Blu-ray Disc boxset from Network.

All four movies can be watched in their original 4:3 aspect ratio or in a new 16:9 widescreen special edition. Extra features include (dependant on the film) original episode or movie soundtrack, trailers and original titles. The boxset also includes Spazio 1999 – the Italian cinema edit, eschewing the original Barry Gray score for one by Ennio Morricone.

With delivery expected from 31st January 2022, the boxset is available for pre-order now for just £40 (rising to £50 in January).