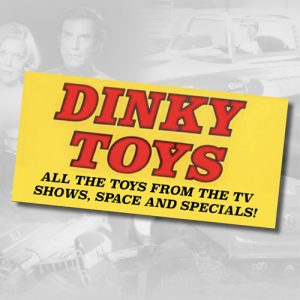 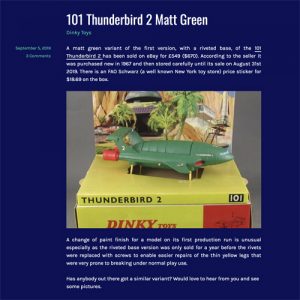 Dinky Toys remain some of the most memory-jogging and collectible merchandise produced in connection with the Anderson productions.

For anyone who wants to reminisce, or even for some research into the variations available, check out dinkytvspace.com (you can also find this in Resources > Links).

“The site has been up and running for about two years but has been at least five more years in the making. I had started collecting Gerry Anderson themed Dinkys in the nineties, having been a fan of the various TV series from my childhood. The first model I bought was a pretty battered 104 Spectrum Patrol Vehicle and various others followed over the years, generally in less than tip top condition. Then about ten years ago I decided to collect a full set of the GA TV show models in good to mint condition with boxes and it was then I realised that there were lots of variations and instead of 20 odd models there were going to be lots more. The bug had got hold, I couldn’t shake it and the bank account took a major hit!

“The 353 Shados were the first set I pulled together, but it was hard to source accurate information about how many versions and variants there were. Added to the fact that this genre of models were not really supported or even liked by many of the Collector’s clubs that existed. So I started cataloging what I could find with the intention of perhaps releasing a book at some distant time in the future, however,  it became clear that everytime I finished a ‘chapter’ it was out of date because some new information had come to light. 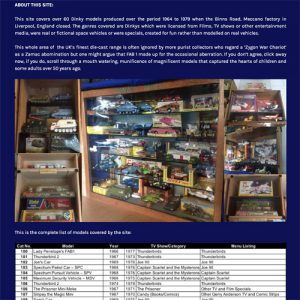 “I was often researching by looking at websites like the Eagle Transporter forums, Laurent Classe’s Captain Scarlet and Thunderbirds sites and many others and it became clear that the best way to catalogue my collection was to create dinkytvspace.com  which I could then update easily as new information came in. And when the site went live at the end of 2017, new facts and images did arrive. I was delighted to discover that there are some really knowledgable collectors of this genre out there who are happy to share their data and advice and the site has grown from there. I did widen the remit from just Gerry Anderson models to all TV, Space and Specials because I felt that they were part of the same Dinky story and ethos that brought a lot of happiness to the boys and girls of the 60s and 70s and a few adults as well!

If Fanderson members can provide new information and/or images or point out any errors or inaccuracies please contact me on dcmtvspace@virginmedia.com or via comments on the site itself.”