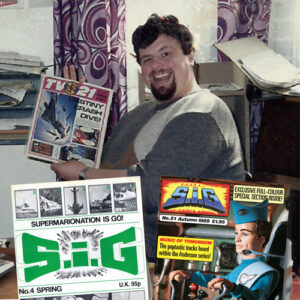 It is with great sadness that we report that David Nightingale, one of Fanderson’s founding members and biggest personalities, has died.

David created Supermarionation Is Go! magazine in 1981 and it was to be the bedrock of the club when Gerry Anderson worked with fans to create Fanderson. The quality of SiG was exemplary for a fan magazine, and continued in SiG’s successor Century 21 and the classic television magazine Timescreen. David’s quality ethos was to spur him on to open not one but two Thunderbooks stores, and then to embrace online trading by opening Star Trader. His most recent work for the club brought him full circle as he worked with Mike Jones on the SiG 21 anniversary special.

Larger than life, with a great bubbly, friendly personality, David was a huge fan of Gerry and Sylvia Anderson’s work. He was a regular fixture behind a merchandise table at conventions, where he made many friends.

We will have a full obituary for David Nightingale in FAB 100.

UPDATE 7th December: You should be able to join the live stream of David’s funeral at https://www.blackpoolfunerals.live/

The family would like to thank everyone for their kind words and would love to see as many faces as possible at the funeral but understand not everyone can make the day. With that in mind, they have arranged for the funeral to be streamed (details to follow).

The family have discussed donations (“My dad wasn’t a flower man, he was more into his Thunderbird puppets”) and ask that any donations go towards his grandson’s tour with Foxhall Under 11s football team: