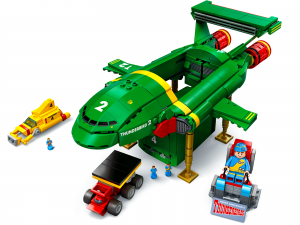 In 2019, thousands of club members and fans supported Andrew Clark’s Lego Ideas project. Sadly, though it reached the 10,000 supporters to be included in the official review by Lego, it wasn’t selected to become a set that we could all buy.

Now, Andrew has re-worked his project to ditch the interchangeable Thunderbirds/Thunderbirds Are Go elements to be solely the classic Thunderbird 2 from the Thunderbirds TV series. Read more and pledge your support now by clicking here.

Since Lego Ideas was set up in 2010 (as Lego Cuusoo), 35 sets have been produced on a wide range of topics. Andrew Clark has been luckier than most budding designers, as his Doctor Who and The Flintstones sets were both chosen to become reality.

You can see more Anderson designs on the Lego Ideas site.