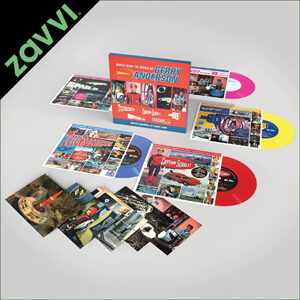 Silva Screen Records and Zavvi have announced a newly remastered limited edition Anderson 7” singles box set,  featuring music from the extensive Barry Gray soundtrack catalogue. Gray’s partnership with Gerry and Sylvia Anderson was one of the most successful of its kind in TV history, forever linking the iconic Supermarionation imagery with the composer’s distinctive orchestral themes.

Due for release on 31st August, this exclusive box set contains the soundtracks to some of the Andersons’ most popular Supermarionation shows, including Thunderbirds and Captain Scarlet And The Mysterons, and also includes the soundtrack to live action series Space:1999. This limited edition 7” singles box set is the perfect addition to your vinyl collection.

One lucky club member will win one of the new boxsets – see the first issue of FAB-lite (working title) soon!

Previously a staggered release by Silva Screen from 2012 in time for 2013’s Record Store Day, the new boxset includes The Cass Carnaby disc on shocking pink vinyl (the 2013 was a clear flexidisc), five exclusive art cards and is limited to just 500 units worldwide.