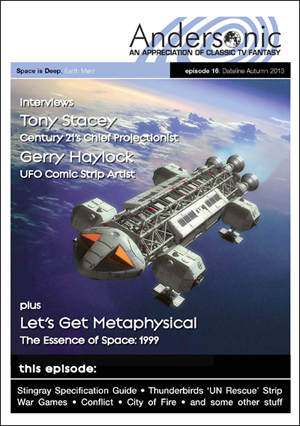 Issue 16 of the Andersonic fanzine is now available to purchase online! With cover art by Rob Caswell, there’s a wealth of material for Gerry Anderson fans to feast on, including:

Tony Stacey interview – a new interview with APF & Century 21’s Chief Projectionist from Stingray up to UFO. Tony talks about his time at the studio and his escapades with Stanley Unwin, alligators, James Bond, Superswish curtain track and filming with John Read.

Gerry Haylock Interview – Countdown’s comic strip artist who drew UFO and Doctor Who for the comic, as well as Land of the Giants for Joe 90: Top Secret and even a few Protectors covers for TV Action. Gerry talks about his work and techniques he used on the comic strips.

Space:1999/ The Exiles – a look at the shooting script of this early Year 2 episode with comparisons to the finished episode. Find out what happened when Koenig decided to open fire on a guest and what links Space:1999 and Hawkwind.

Let’s Get Metaphysical – Amidst all the rumours of remakes and reboots, Robert E Wood takes a look at the heart and soul of Space: 1999 and addresses that old chestnut of scientific plausibility.

UFO/Conflict – we take a look at an underrated UFO episode and find there’s more to it than a load of space junk.

Space: 1999/ War Games – Mark Braxton looks at this well-regarded episode and finds a lot of Hawks but a total lack of Doves.

To order your copy of Andersonic issue 16 online or by post check out andersonic.co.uk